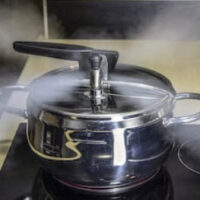 Crock-Pot Express Pressure Cookers randomly explode scalding consumers, according to one lawsuit filed in federal court. The lawsuit is attempting to seek class-action status and alleges that the devices were built defectively.

Further, a faulty gasket allows users to open the pressure cooker while the contents are still under pressure. According to Sunbeam Products Inc., the manufacturer responsible for the Crock-Pot Express, this should not be possible.

While the company is based right here in Florida, the plaintiffs come from all over the U.S. Kimberly Rife, of Romeoville, Illinois, maintains that she carefully followed the directions outlined in the manual when she was cooking chicken with rice soup. After the process was completed, Rife released some of the pressure from the pressure release valve, watching until the steam stopped coming out. She then pressed the stop button and waited several minutes before opening the lid. According to her lawsuit, however, a significant amount of pressure remained. Rife was easily able to remove the lid despite safety measures in place that were supposed to prevent that from happening. When she opened the pot, the contents exploded scalding her hands, stomach, and the kitchen. Rife was taken by ambulance to the hospital where she received treatment for first- and second-degree burns.

While the Amazon listing contains mostly positive reviews, there are at least five instances of customers complaining that they were injured by the device. One stated that the product exploded on her daughter leaving her with second-degree burns on her face and chest.

Attorneys for the plaintiffs are attempting to certify a class for this lawsuit. This will give more individuals, including the five who reported being injured on Amazon, an opportunity to recover damages related to their injuries. These damages can include medical expenses, lost time from work, property damage, and reduced quality of life.

At present, no recall has been ordered by the government or voluntarily undertaken by the company. However, plaintiff’s attorneys have filed a freedom of information request with Sunbeam Products and the U.S. Consumers Product Safety Commission on all records related to the allegedly defective pressure cooker. The Safety Commission recently denied that request pending an investigation into the pressure cooker that they are already conducting.

The plaintiffs in this lawsuit will need to show that a design defect contributed to the explosion that caused their injuries or that they were improperly warned about the potential dangers of the crockpot and therefore put in a perilous situation.

If you’ve been injured by a dangerous or defective product, the Ocala defective product attorneys at Musleh Law Firm can file suit against the manufacturer and recover damages related to your injuries, lost wages, and reduced quality of life. Call today to schedule a free consultation.